I had 18 people enter into the drawing for my giveaway. I wish you could have all been winners. I know it isn't much of a consolation prize but you are all WINNERS in my book. Everyone of you are special. I don't say that to win brownie points with you, people only need to go to your blogs and read. 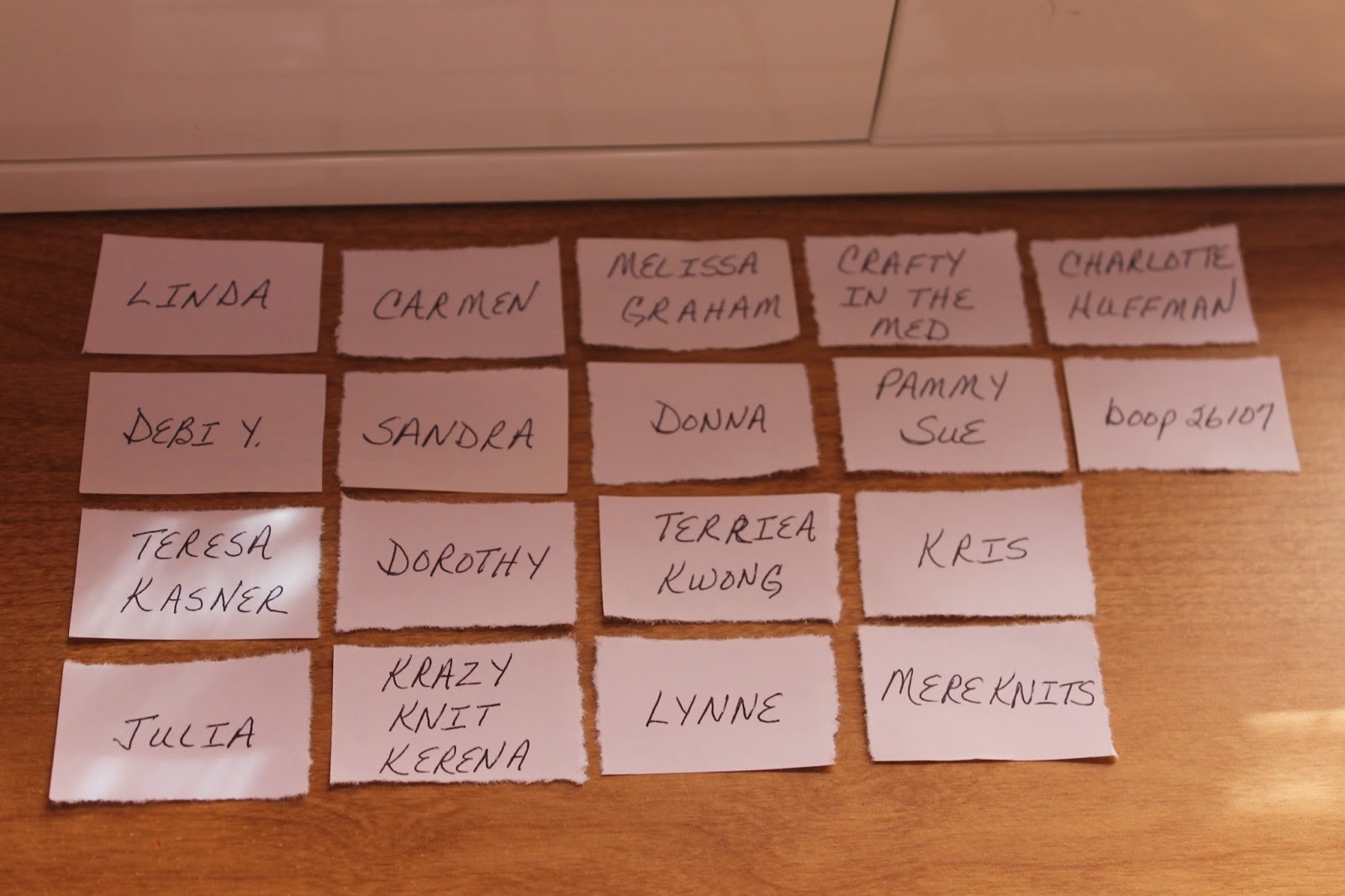 Don't lose heart though, I would like to have another GIVEAWAY by the end of the year to celebrate 4 years of blogging, so hang tight and keep watch. 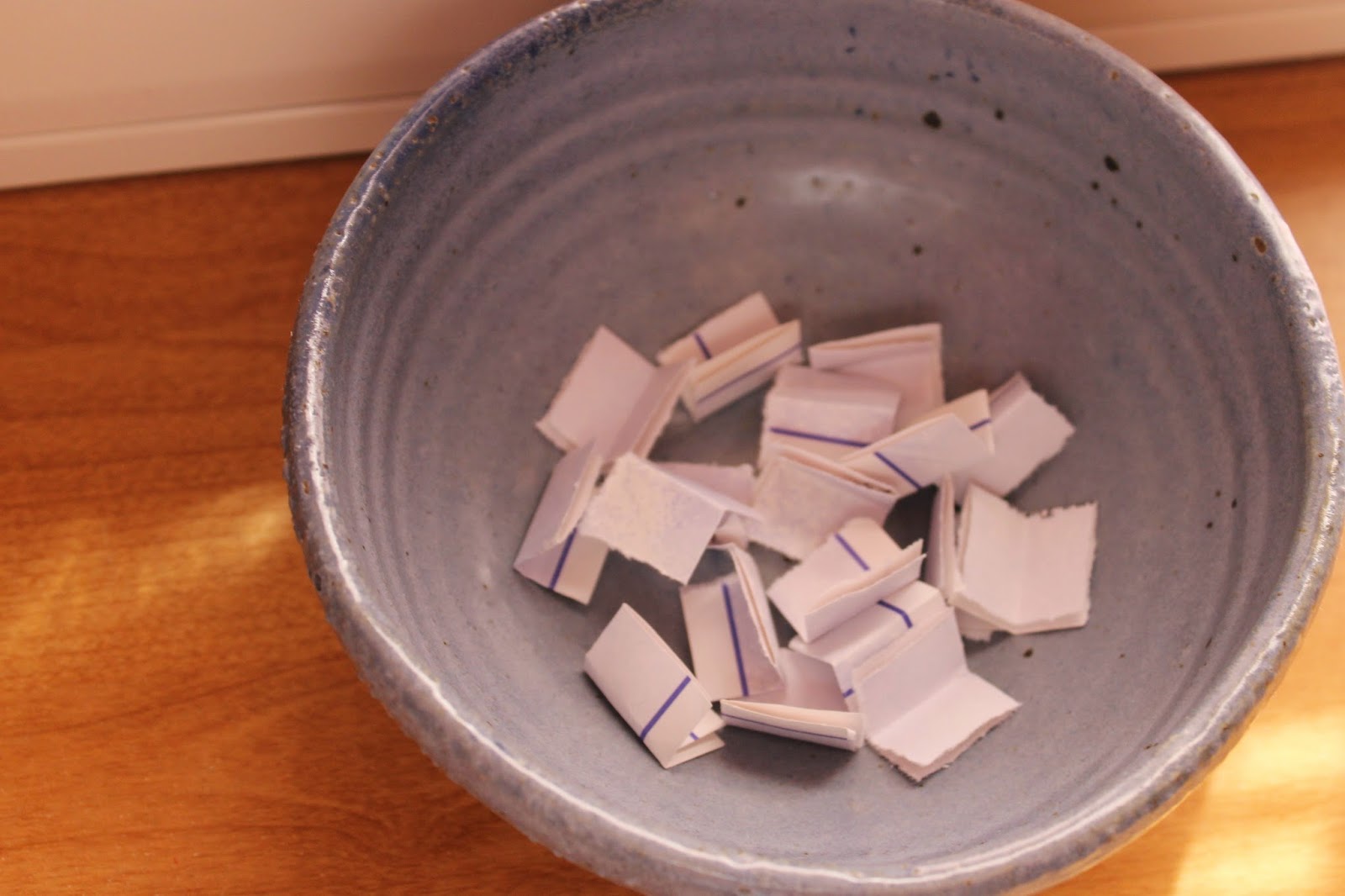 As per the usual drill, names were written and papers folded, then placed in the bowl my daughter made in her art/pottery class in college. 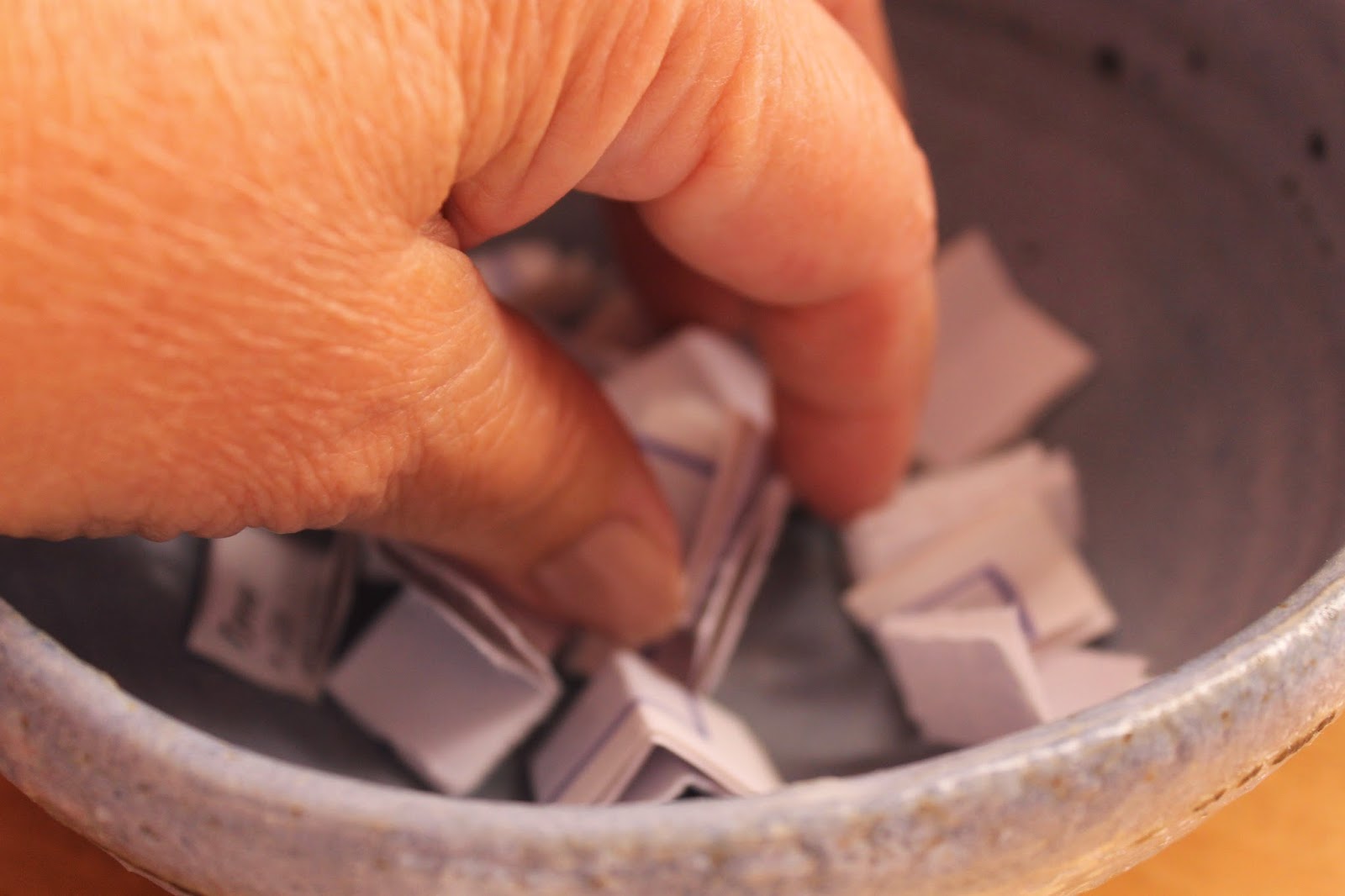 I close my eyes and swish the papers around, pick one and the winner is........ 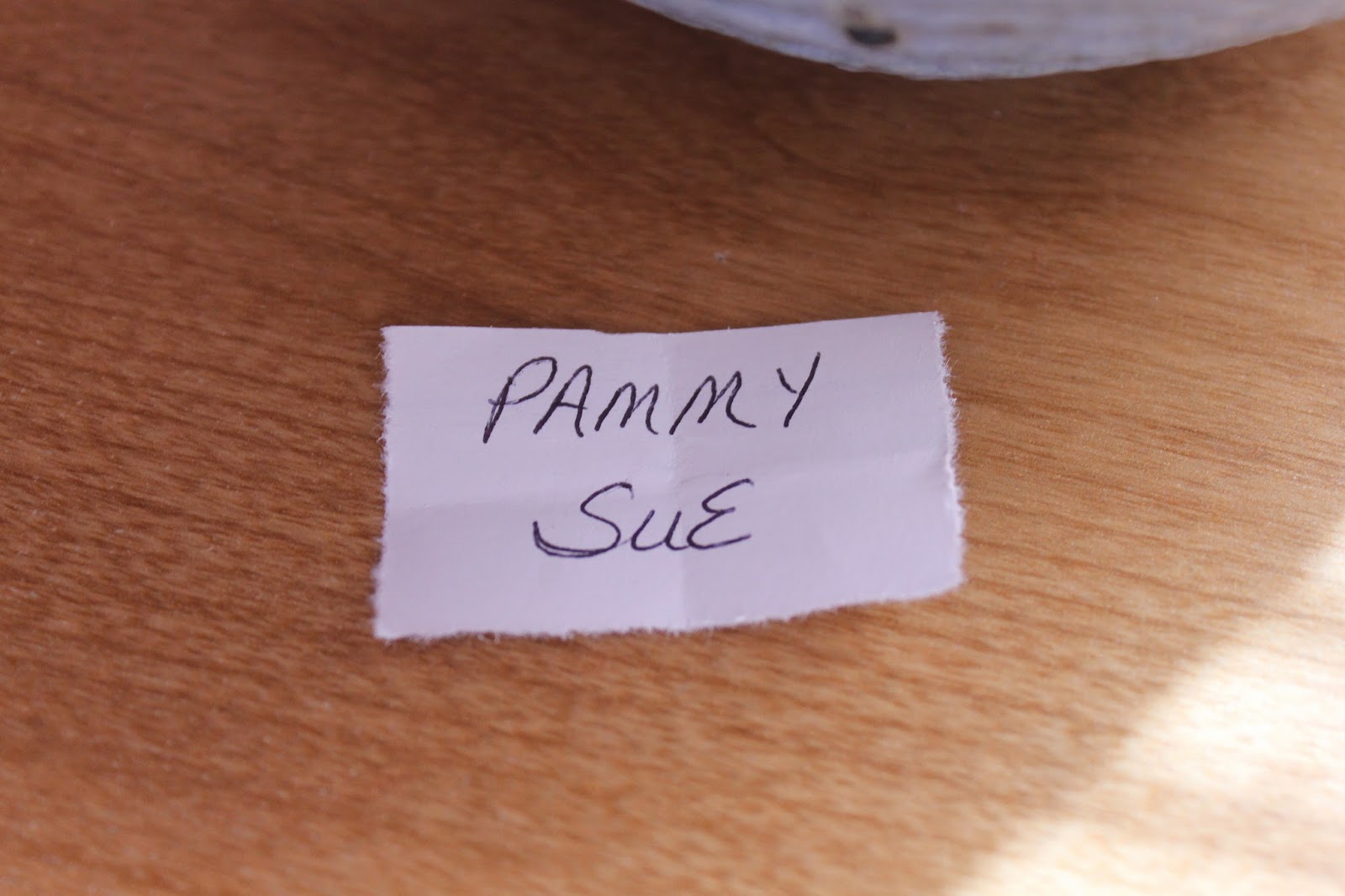 Pammy I believe I have your address somewhere, but just in case please send it to my Yahoo email. I will also leave you a message on your blog.
*If Pammy does not respond in 48 hours then I will draw again for a new winner.*
Thank you all again for entering and being followers.
Hope to have another GIVEAWAY in December.
♥♥♥
Posted by Susanne Tyree at 10:53 AM 11 comments:

Email ThisBlogThis!Share to TwitterShare to FacebookShare to Pinterest
Labels: WINNER

Hi everyone. Just a quick reminder that my giveaway will be ending tonight at 11:59pm EST here in Ohio. Drawing will be on Saturday. So, if you still want to get in on a chance to win then leave a comment on my last posting. I am also planning on throwing in a couple more things that I did not mention or picture, so they will be BONUS items. I think no matter what you like to do that there is something to please everyone. I thank those of you who joined in and once again, GOOD LUCK!
Posted by Susanne Tyree at 3:48 PM 2 comments:

Once again I am finding myself so far behind. Folks, just know that I am not being a slacker. For over 2 weeks I was dealing with a painful left foot as a result of a dining room chair leg (at my daughters) jumping out to hit my toes. Bruised and swollen, it was difficult to put on a shoe.

Then I went to a class reunion for the first time (#45). It was a two evening affair, the football game Friday night followed by a tailgate party at the F.O.E.. The second evening there was a dinner at the same location. One gal and her husband (they had come after being at the game) claimed to have come and left on Friday because they had colds, felt ill and complained that the room was way too hot, her words "it was 200 degrees". Nice to know this after she gave me a nice big hug and insisted on sitting next to me. Then on Sunday I went to a family reunion. On Monday (48 hours incubation period for a bug) I woke up with a sore, scratchy throat, coughing and sneezing. Blowing my nose and hacking up a bunch of nasty stuff. Two boxes of Kleenex and a roll of toilet paper later (Thursday) I knew this was not good I needed to see the doctor. When I called they told me they were booked till next Wednesday. She said she would put me on the list if there happened to be a cancellation. By 11am she called and told me they could see me at 1:30 and thank goodness. I am now on an antibiotic, nasal spray and some Mucinex. On Tuesday I had no choice but to babysit my grandson. Two days later guess who has a runny nose and a bit of a cough. Try watching a 2 and a half year old and have them not all over you from the time they get up till you lay them down for a nap. I tried not to breath on him and to not cough around him. All these years one of my pet peeves has been sick people out and about running around unsuspecting well and seemingly healthy people, spreading their germs like they don't have a care in the world, or don't give a crap who they infect. As a nurse I took care of a lot of sick people and not once brought anything home to my family, but then, I knew the patients were sick, and they sure weren't hugging you.

Okay, I've got that off of my chest and enough about it. Let's get to that GIVEAWAY.

It is open to ALL of my followers whether you live in the US or elsewhere. There are 2 requirements ( I will make this easy peasy) you must be a follower and you need to leave a comment on this post only. It can't get any simpler than that. What follows is photos of the items with brief description:


I hope you participate in this giveaway. You only need to be a follower and leave a comment on only this post. That is all that you really need to do, but if you happen to mention this giveaway on your blog (not required, unless you want to) I will put your name in twice for the drawing. Giveaway will end on Friday September 26th. I will post the winner and you need to send your address to my yahoo email address located near the top of the page in the right hand column. The winner will be announced the following day on Saturday. Thank you for being a follower, have a great weekend and GOOD LUCK ♥
Posted by Susanne Tyree at 5:41 PM 18 comments:

Knock Your Socks Off Giveaway

Hello Dear Friends. I'm sorry I don't have any pictures to share with you on this post but don't dismay, I will have some to share the next time. I have been busy as usual. There seems to be no time for idleness and that is okay, it keeps me out of trouble. I did want to touch base with you though and let you know all is well. As a lot of you faithful readers know, I have been doing some organizing of the sewing/craft room. It is taking awhile because I work on it as time allows and sometimes that means big gaps in the progress. One thing that seems to eat up a lot of time is the sorting of hundreds of downloaded patterns. I am organizing them mainly because I spend way too much time hunting for a specific pattern and when you have no rhyme or reason to the mountain of papers then you are wasting precious time and that isn't good. Personally, I got sick and tired of it and out of frustration I decided to remedy that problem.

Now for the good stuff.....in my quest I discovered I am a bit crazy. I am organizing books and what do I discover but that I have a few duplicates, yeah, I bought 2 of some of the same books. A couple of the books were actually quite pricey and I'm sure I could be rid of them easily on Amazon or Ebay. Instead I have decided on doing a GIVEAWAY. Why on earth would I want to sell new books to strangers when I could do something to make my followers happy. The happiness doesn't stop with just the books, there will be other goodies included in the package. I will be posting pics leading up to the time I announce when it will start and end. I can only say to check in now and then as I will be posting specifics. I will say this, the giveaway will only be open to followers, so if you aren't a follower and want a chance to win then feel free to click the FOLLOW button and join in for the fun.

Hope you all have a good and safe weekend. God Bless You All ♥
Posted by Susanne Tyree at 12:33 AM 6 comments:

Susanne Tyree
Ohio, United States
Hello. I'm old enough now to be considered an antique. I am a wife, mother, semi-retired nurse with a love for God,country, family, yarn, fabric and all things crafty. My German mother taught me to knit and crochet when I was 12 years old. She made things without a pattern. I learned quilting from my sweet mother-in-law who was from the Appalachian Mountains. It gives me great joy to share homemade gifts with family and friends. It would take 3 lifetimes for me to use up all the craft materials I have acquired. It is my addiction. There is no cure.

Do we possess the yarn, or does the yarn possess us?

~ My blog is a soft place to land~

~I am definitely a "material girl"~

This is a Flickr badge showing public photos and videos from sstyree. Make your own badge here.